Exploring Haida Gwaii this past June was so much more than a vacation. It was a week-long educational experience of a lifetime. Prior to going to Haida Gwaii, it had been at the top of my bucket list. It was a place I had often imagined visiting but just couldn’t put enough pieces of the puzzle together as how to make it actually happen…until this past June.

First obstacle I had to overcome was my fear of flying. About 10 years ago on a flight from Ottawa to Vancouver, I had a panic attack that was very scary and embarrassing for me. I haven’t flown since then sticking to road trips instead. As a Mental Health Instructor I know a lot about phobias and how to overcome them so it was time to practice what I preach. Many of my fears around flying in an airplane were based on inaccurate thinking so I started with researching the facts. Statistically speaking, flying is far safer than driving. The flight would be direct and short in duration (less than 2 hours). I would be travelling on a DH3. I did research into this series of Dash 8 and found even though there were accidents, fatalities and other incidents reported, none were associated with this particular series and none had occurred in Canada. I also felt reassured knowing I would be travelling with a friend who would be sitting right next to me the whole time. The morning of our flight, I practiced a number of anxiety/stress reducing techniques including calming breathing, Qigong, visualization, progressive muscle relaxation, tapping, hand reflexology and spent some time connecting with nature watering my garden. The flight there and back turned out to be a breeze with no incidents on my part. I learned an important lesson; phobias can be overcome by gradually exposing yourself to what you fear. The self-help anxiety reducing techniques I practiced combined with some focused CBT-based thought challenging exercises were effective for me, helping me to overcome my anxiety and fear in the moment. Now I need to keep at it and get back on an airplane sooner than later.

My interests for going to Haida Gwaii included learning more about its flora and fauna as well as Haida culture. Travelling to Haida Gwaii allowed me to directly experience a land and people rich in history and tradition. I witnessed firsthand people living off the land and sea as I watched locals clam digging and crabbing on North Beach in Naikoon Provincial Park. I saw in the people of Haida Gwaii a real pride in their land and a dedication to care for and protect it. Every forest I hiked through displayed reminders to tread lightly on the forest floor so that it would be around for generations to come. Some of the flora and fauna are different to the mainland where I live. During June, much of the forest floor was covered with Bunchberry/Creeping Dwarf Dogwood (Cornus canedensis). Even though it can be found across Canada, it especially likes forested upland and wetland areas. 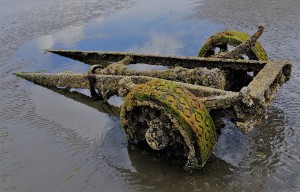 Logging on Haida Gwaii has a long and checkered history. I saw firsthand examples of logging practices from years gone by that resulted in long-term destruction to the surrounding environment including fish-bearing streams and wetlands. Occasionally I came across logging equipment used years ago that had just been left there after forests had been cleared. I didn’t notice Douglas-fir trees which are plentiful here but instead forests filled with Western hemlock (Tsuga heterophylla) and Sitka spruce (Picea sitchensis). I was amazed at the number of eagles and ravens that inhabit Haida Gwaii. Not surprisingly, the two main kinship groups of the Haida Gwaii clans are Raven and Eagle. I learned to read tide tables and respect the dangers of being caught unprepared for the high and low tide times in intertidal zones. Sometimes this meant skipping planned trips to explore recommended tourist attractions that required travelling across vast amounts of beach.

I recommend renting a vehicle as it will allow you to more easily travel to the many Haida Gwaii communities and attractions. Our road trip consisted of overnight stays or stops to visit Sandspit, Queen Charlotte, Skidegate, Tlell, Port Clements, Masset and Old Massett. One of the most prominent examples of the change of pace on Haida Gwaii was the complete absence of traffic jams. A couple of times while travelling along the main highway that connects the small communities of Haida Gwaii we were required to come to a complete stop due to infrastructure improvements taking place. I remember looking in the rear-view mirror and feeling pleasantly surprised that after 10 minutes waiting, there were still no other cars lined up behind us. There were no crowds of people anywhere, just small gatherings.

Haida Gwaii is long in history. A must see is the Haida Heritage Centre and Haida Gwaii Museum. While there, I joined an educational tour led by a young Haida woman who shared with us the stories behind each of the six totem poles that stand proudly facing the water before them. Inside the museum, there are many fascinating examples of Haida knowledge, scientific information and specimens of oral history and art.

One of my favorite things to do while visiting Haida Gwaii was to connect with local artisans. Authentic Haida art isn’t cheap but the art is diverse and the quality of the work is exceptional. On National Indigenous Peoples Day I attended a community celebration in Old Massett. It was a great opportunity to learn more about local Haida culture and art including carving. A distinct difference between Haida carving compared to other West Coast native art cultures is the use of a black slate material called Argillite. Black argillite is only found on Haida Gwaii. Argillite carvings often depict mythical spirits, animals, Haida family crests, replicas of totem poles, bentwood boxes, canoes and other carvings, as well as contemporary interpretations.

One of the most unusual places I encountered to grab something to eat/drink was a funky bakery operating out of an old bus hidden off the road to Tow Hill. Moon Over Naikoon Bakery certainly won over my taste buds. Their cinnamon buns were excellent. Look out for them if you’re travelling in the area. If you can’t find them or they’re not open when you’re visiting, there are plenty of other Haida Gwaii gems including Jags Beanstalk in Skidegate, Crow’s Nest Cafe and Country Store in Tlell and The Ground Gallery & Coffee House and Charter’s Food Truck, both in Masset. 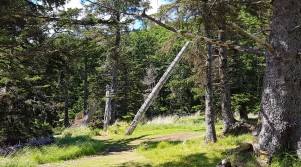 One of the most spiritual moments of my trip occurred during an afternoon visit to the ancient Haida village of K’uuna Llnagaay (Skedans in English) on Louise Island. K’uuna Llnagaay is outside the boundaries of Gwaii Haanas National Park Reserve and National Marine Conservation Area Reserve, but it is within the Haida Heritage Site. Visiting here was part of a Moresby Explorers single day tour I participated in. The highlight of the expedition for me was listening to one of the Haida Watchmen and her explanation to our group how the village’s homes and totem poles were constructed, causes of their eventual destruction as well as her sharing with us her family’s personal historical connection to the village site.

One final learning for me was more of a reminder how important it is to take a vacation on a regular basis. Vacations mix-up the standard routine of daily life. Life is full of stressful challenges. Work for many of us is full of daily stressful challenges, both good and bad. Going to Haida Gwaii reminded me how important it is to change gears. Experiencing Haida Gwaii was enough of a change from my usual pace to help me reenergize. I’ve been back into the urban flow of things for a couple of weeks now and I’m still feeling the benefits of my Haida Gwaii vacation. I’m rested, productive, focused, calmer and more appreciative of the natural environment around me and of our great land. So please, take your vacation this summer and thoroughly enjoy it.

5 thoughts on “Haida Gwaii…Much More Than A Vacation”